Showing posts from July, 2012
Show all

An Ode to Stretchy Pants or Why Metabolism Sucks 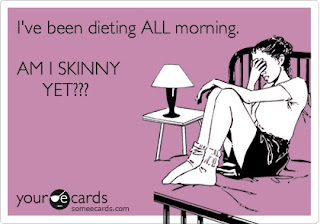 Ten years ago, my metabolism kicked ass. I could eat whatever I wanted without gaining a pound. Now, granted my near-constant hangover from the drinking bouts each night probably helped keep the weight off; turns out, you don't gain much when you're vomiting up vodka almost everyday before your 8am class. But still, you get what I mean. For most of my life, I ate what I wanted, sat around as much as I wanted, and still looked pretty damn good.

Now I'm 28. I still eat what I want and sit around a good deal. I still look pretty good. But that look might have to do more with the fact that, during the summer months, when I am off from work, most of my clothing involves pants/shorts with elastic waistbands.

Almost two weeks ago, however, I threw on a pair of jeans to go out with my sister. And gasped in horror.

They fit. But gaining even two more pounds was going to necissitate new clothing, and since I have a lot of clothes, I realized I could ill-afford to replace them all simp…
Post a Comment
Read more 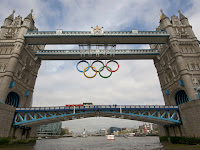 I love the Olympics, irrationally and with wild abandon.  Sports 99% of the world couldn't care less about for 3 years and 50 weeks at a time suddenly have me at the edge of my seat. Fencing? Synchronized swimming? Archery? And oh man, please don't ever let me miss the table tennis, a sport in which, I am utterly convinced, I would be an Olympic athlete if only my parents had provided adequate training when I was a child.


One of my favorite parts is, of course, the opening ceremonies. I wasn't so much disappointed in London's pageantry as totally baffled by it. Why was there a 100 foot tall blow-up doll of Voldemort? And while I respect British history and contributions to the world, Danny Boyle (the director of Slumdog Millionaire and the artistic creator behind the ceremonies) was a little too conceptual for my taste. And it ended up making British history look--frankly--lame. An English meadow that morphs into a weird symbol of London industrialization that inexplica…
Post a Comment
Read more

Just Your Average-Leader-of-the-Free-World-Type of Guy

July 06, 2012
There is a question that has been plaguing me since George W. Bush began campaigning for his first presidential term over twelve years ago. I have noticed, during this current presidential campaign, the same issue popping up in a much subtler--but no less annoying--manner, the idea that the best thing our president can be is a "normal" guy.  Why, oh why, in our country do we want our president to be so average? Are we so threatened by our own fear of being "average" that we have to demand our politicians meet us here, in the middle?

Governor Romney has had to battle against President Obama's "everyman" status throughout the election; Obama, as the child of a single parent, with his charming stories of college debt and normal dad-of-two-young-girls-who-still-have-to-make-their-own-beds-even-in-the-white-house image, is hard to fight when you're the son of a former Governor who sent you to one of the toniest private high schools in Michigan. But, ala…
Post a Comment
Read more
More posts